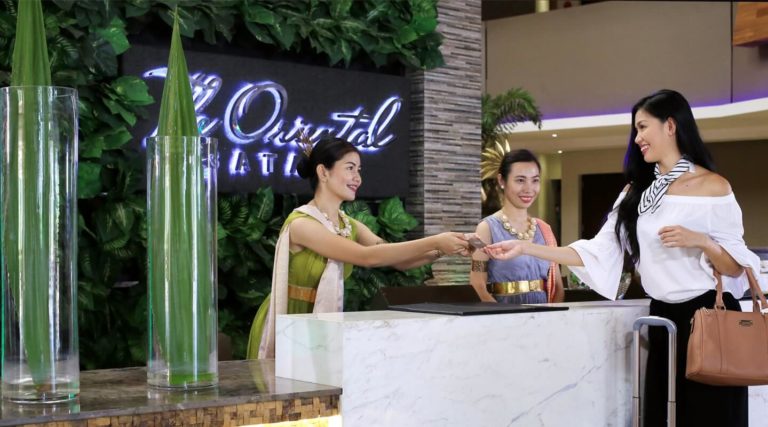 Forty-five years ago, luxury hotel living came into Bataan in the form of the Bataan Hilltop Hotel. Located within the Bataan Export Processing Zone (established in 1969, it is the first export processing zone in the country), now the Freeport Area in Bataan (FAB), it was designed by the late National Artist for Architecture Leandro V. Locsin and was inaugurated on September 28, 1974, by the late President Ferdinand E. Marcos.  It operated for over a decade until it was abandoned around the time of the Edsa Revolution.

After being neglected for almost 30 years, the hotel was acquired by the LKY Property Group (part of the LKY Group of Cos. headed by COO Wilbert Lee), was redeveloped as a luxury businessman’s hotel and reopened on December 2014. Today, the four-story (two upper floors and two basement), four-star Oriental Bataan, under the guidance of General Manager Joseph R. Ong, is a member of The Oriental Hotels and Resorts, a well-recognized hotel group in the Philippines.

During the redevelopment, the dated Brutalist architecture of Locsin on the exterior of this building was retained but this was complemented by very elegant, vivid and classy modern Asian Thai interior design that is not hard to appreciate. The hotel, sitting on top of a hill (making the hotel quite airy, serene and relaxing), is unusually shaped like the number eight, with the swimming pool and the Lobby Lounge, both within the two concentric circles, surrounded and overlooked by the upper- and ground-level rooms.

The 86 huge, clean and well-kept air-conditioned rooms all have wall-to-wall carpeting, magnetic door locks, in-room coffee and tea facilities, flat-screen cable television, work desk, in-room safe and Wi-Fi access (also available in public areas).  The en-suite bathroom has a rainshower head, bidet, and a shampoo and body wash dispenser. The Governor Suite and the Presidential Suite come with their own dining area, receiving area, pantry and a bathroom with a bathtub.

The hotel also has a 24-hour Front Desk, a small nautilus-shaped adult swimming pool with sun loungers, function room, fitness center (basement) and an outdoor lounge area (The Cliff Lounge), with beds and couches, where you can enjoy the afternoon breeze. The Oriental Adventure Camp, utilized for team-building activities, offers 18 challenging but fun obstacle courses. The in-house Thai-inspired spa has a small outdoor jacuzzi.  Here, you can have a massage in private rooms or on massage beds under the trees.

The four-story dormitory building, perfect for executives and young professionals working in or around the Freeport Area of Bataan looking for long-term lodging, offers 173 units of high-end dorm-type accommodations at reasonable rates. The Convention Center by The Oriental, a 15-minute drive from the hotel, offers seven convention halls for conferences, workshops and art exhibits.

Being situated within the Bataan Freeport area, this place is perfect for business. Still, being literally on a hilltop, it is secluded from the businesses surrounding it. Though not a beachfront hotel, it is just a 15-minute (3.2-kilometer) drive to Bonifacio Port, the jump-off point to Five Fingers Cove, one of the must-visit tourist spots in the province of Bataan. This series of coves is famous for its sweeping hills, grassy cliffs, turquoise lagoons merging with the deep blue sea, long white beaches in quiet coves, outline of islands and mountains in the distance.