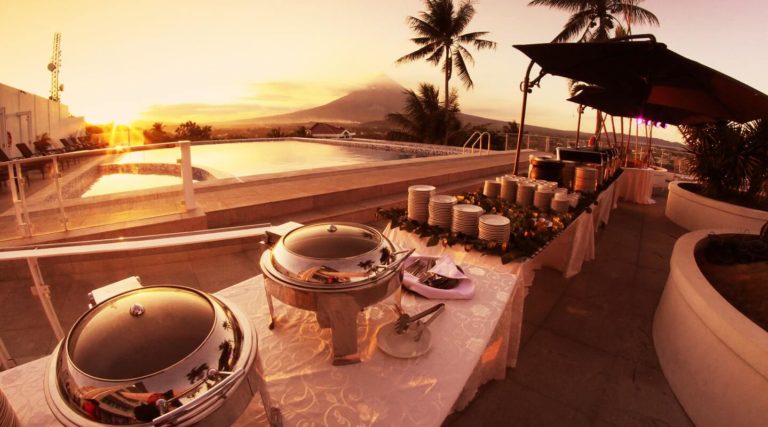 A Hotel which is part of a chain and those with complete dining and convention facilities usually offers the very same features and services to all the places where they are located.

Small and independent hotels may provide a local touch but most often they don’t have the amenities which are essential for large groups much less the consistency or standard of service that discriminating clients require.

The Oriental Hotels and Resorts has this in mind when they consider putting up one.

“We want our guests to fully savor the flavor of localities and to experience new discoveries without having to compromise on de luxe living,” says Wilbert Lee, president and CEO of The Oriental Hotels and Resorts.

In its first hotel, The Oriental Legazpi, located in Albay, no less than the world-famous Mayon Volcano is providing that local touch.

Situated atop Taysan Hill, the hotel boasts of the majestic view of the volcano and the refreshing blue waters of the Albay Gulf. It is a jewel of white concrete and glass which also makes full use of natural light that streams through the high glass ceilings of the lobby and walls.

“You would feel a sense of freedom with its wide corridors and hallways,” says Lee. “The concept of more space is complemented by its bright interiors as well as by the energy-saving LED lights and the natural light that easily comes in.”

The decision to open a hotel in Legazpi City began as a commitment, as a way of giving back to the community.

“He wanted economic growth for the town that embraced him. He started with a trading company then expanded into hotel and resort development, commercial leasing, retail marketing, public transport terminal operations, construction and housing, food, and travel and tours,” says Lee.

It was in 2011 when The Oriental Legazpi was established with the goal of creating a regional tourism destination. In February 2012, again with the aim of highlighting the place’s distinct features, The Oriental Leyte with 65 well-appointed rooms (to be expanded to 145) opened its doors to the public.

The Oriental Legazpi is the biggest hotel and has the largest banquet facility in Legazpi City. It has 115 guest rooms and suites and grand ballrooms which can accommodate a thousand, perfect for business conferences and grand events.

A typical room offers modern deluxe conveniences. The rooms are spacious, with free Wi-Fi, and a 32-inch LED TV.

Guests may choose the Mayon side rooms, where they will be treated to the majestic view of the volcano and the gulf, or the quieter cityscape and far-off mountain range of the province. All rooms are outfitted with modern electronic energy-saving devices, a green hotel initiative.

There’s an infinity pool overlooking the world-famous volcano. Adjacent to it is a jacuzzi. For wellness and relaxation, there’s a gym and spa in the basement.

For other facilities, there’s the Jasmine Restaurant at the ground floor lobby offering native cuisine and international favorites. Relish its spicy shrimp stuffed with laing, delectable crispy pata, and a traditional serving of adobo rice. It has three private rooms with a capacity of 20 persons each for exclusive dining.

The hotel provides shuttle services for guests to the city and to malls, markets, shops and restaurants which are a stone’s throw away from the hotel. It also offers tour packages such as swimming with whale sharks at the gulf to ATV rides.

The Oriental Legazpi aims to be the preferred hotel in the Bicol Region and the first all-season resort for leisure and business travellers. Visit its website at www.theoriental-legazpi.com