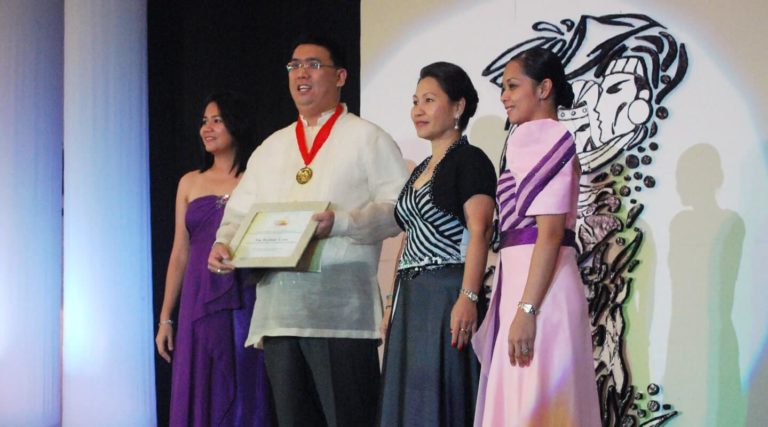 Wilbert T. Lee, one of this year’s recipients of the Rokyaw Ibalnong Awards for business and industry is the man at the helm of LKY Group of Companies. LKY is the company that introduced the Grand Terminal concept in the cities of Legazpi and Sorsogon and franchisee of known foodchains in the country.

Wilbert T. Lee is the son of the late Sorsogon settler Lee King Yek who was originally from Fujian, China. Wilbert T. Lee’s father started the retail business in Sorsogon with the Goodluck Trading which Wilbert T. Lee later transformed into Goodluck Commercial. His sound vision and excellent entrepreneurial skills propelled the growth of LKY Group of Companies to the successful conglomerate that it is today, from build operate and transfer to hotels acquisition and development.

After graduating in 1991 from the University of Santo Tomas with a Bachelor of Science degree in Business Administration, Wilbert T. Lee honed his entrepreneurial acumen when he saw the need to improve the family owned Goodluck Trading Company. In 1992, Wilbert T. Lee boldly initiated the move to purchase the Deeds of Rights of adjacent commercial spaces. Young and full of fresh ideas, Wilbert T. Lee then negotiated for longer lease terms with building owners; made major renovations and repackaged Goodluck Trading giving it a more modern and spacious look and transforming it into Goodluck Commercial highlighted with a large-scale department store.

The visionary in Wilbert paved the way for LKY Development Corporation. From a sole proprietorship of Goodluck Commercial, Wilbert T. Lee established the corporation to introduce the family’s property development ventures. Pioneering in new real estate development practices, Wilbert T. Lee was at the helm of the first build-operate and transfer (bot) agreement (a long term lease agreement with the Catholic Church in Sorsogon over a portion of the lot covered by the Sts Peter and Paul Cathedral) for the concession to construct and operate a 2-storey commercial building. From then on, LKY Development Corporaton continued to undertake well-planned development projects in strategic locations.

Wilbert T. Lee proved those who believed that Sorsogon was not yet ready for the fastfood lifestyle wrong. In 1997, Wilbert T. Lee went on to introduce Jollibee and Chowking to the province. Today these two brands control majority share of the fastfood market segment in the area and is constantly growing each year.

That same year, such remarkable achievement merited Wilbert T. Lee the esteemed “Most Outstanding Sorsogueño Award in the field of Business and Industry” from the Provincial Government of Sorsogon.

Another significant undertaking credited to Wilbert T. Lee is the “Grand Terminal” concept seen to dominate key cities starting with the existing Legazpi Grand Terminal, followed by the Sorsogon Grand Terminal. To date, LKY is labeled as the first and only developer of an integrated transport terminal across the nation highlighted by a fully-automated terminal operations facility, a retail hub, a lifestyle and entertainment center and tourism spot.

Just recently, Wilbert T. Lee was elected as the first President of the Philippine Chamber of Commerce and Industry (PCCI), Inc. San Juan City because of Wilbert T. Lee contribution in strengthening the San Juan business community. Now, more than ever, Wilbert T. Lee is focused in his advocacy for business growth, strategic business services, and national as well as international business networking resulting in sustainable economic growth for the long-term benefits to Filipino businesses.

Wilbert T. Lee continues to embrace the company’s capability to build, expand and become a contributing factor in the economic growth of the areas he brings his development projects into. This is probably the reason why Legazpi City, thru the Ibalong Festival organizers, has chosen him to be one of the “Rokyaw Ibalnong” Awardees. The term ‘Rokyaw Ibalnong” is taken from the ancient Bicolano dialect that is loosely translated to “Hail to the Bicolano.” Hence, Wilbert T. Lee is one of the chosen 11 Bicolanos along with Senator Chiz Escudero, DOJ Secretary Leila De Lima, Venus Raj and other accomplished Bicolanos, recognized for having shown brilliance, extraordinary talent, exceptional achievement or rare courage in their chosen endeavors.

To date LKY Group of Companies under the wing of Wilbert T. Lee, is into hotel development. His thrust is to be one of the leading premiere hotel chain developers and operators in the country.