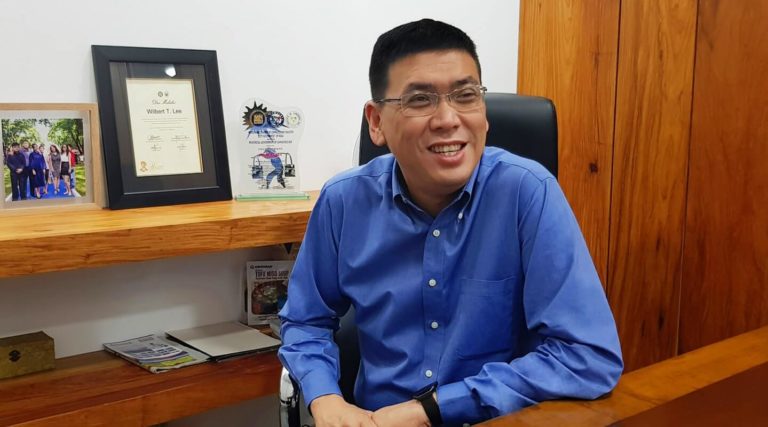 Although he made his fortune building commercial plazas, Wilbert Lee’s heart is in the hotel business. Now, with his Oriental hotels, he continues to work on ironing out the many details that make staying in a good hotel ‘an experience’ – and making sure that guests feel right at home.

Wilbert Lee has always liked hotels. “When my family and I are overseas, I choose the best hotels. To me, it is a big layground, an experience,” he said. He asks to see all the rooms before he decides to stay in a hotel.

It goes without saying that he is very meticulous about the hotels he chooses.” When you go inside, you should feel refreshed,” he said, adding that this can only be achieved if the exhausts that are keeping the air circulating are always running even when the room is unoccupied. He makes it a point to stay in a different hotel in cities where the where the hotel scene is vibrant (like Hong Kong).

As the head of the real estate company, LKY Group, Lee travels frequently around the Philippines to oversee the construction of the company’s signature Grand Terminals and numerous commercial plazas. What he found during his travels around the country is that it is difficult to find quality and reasonably priced hotel rooms, even in the major cities.

But this is not the seed of LKY Hotels and Resorts, Inc. He founded the company in 1996, but it took a while for him to open his very first hotel, The Oriental Legazpi in 2011. This was shortly after acquiring the grand Mayon Imperial Hotel in 2009.

The hotel business is only a small segment of the whole group. Developing commercial neighborhood arcades remains the company’s main business, but hotels are his passion. “I normally do not visit my construction sites for the commercial strips, but I visit those of my hotels,” he said.

While Lee was not formally trained in the hospitality business, everything he knows about hotels he learned through his own self-education. He employs consultants and hotel industry veterans, but derives much from his own experiences. Until now, he takes pictures of the hotel he visits, and meticulously writes down what he likes in the hotels that he stays in. It helped him create his hotels’ manual of operations, detailing its operation and customer service standards.

For his hotels, he advocates quality and consistency in the acronym FSCC ( food, service, cleanliness, and condition). “We want to create a sensory treat for our guests in every city, All you have to do is to look for an Oriental,” he said. “We’d like to be known as a group of boutique hotels where the genuine care and comfort of our guests is our highest mission, coupled with consistency in care and service that is on a par with the reputable chain hotels.”

He noticed the rice of individual travelers, who tend to be more particular with their choice of hotels. In recent years, he said that there is a very strong shift from the traditional box-type hotel towards the smaller boutique hotels, so much that even the bigger chains have created separate brands that are meant to take advantage of this trend.

The most difficult part for Lee is finding people who understand and appreciate his vision for Oriental hotels. “There is a big difference between those who are doing their jobs because they love it, and those who just need the job,” he said.

“What I am looking for are partners who can grow with us,” he said. “I have realized in the past few years the rapidity of the turnover in the hotel business. I can say that the people in the hospitality business are quite pampered, probably because tourism is booming and that there are so few professionals to go around. So I just look at it this way: my people stay not because I pay them well or my words are pleasant to them, but because they believe in the vision.”

Lee hopes that his people may see their work as something that will outlive them, and be a source and pride and inspiration for their children. He cites a quote from art critic John Rustic, whose words inspired the monumental task of erecting the Empire State Building:

“When we build, let us think that we build forever. Let it not be for present delight, nor for present use alone; let it be such work as our descendants will thank us for… and that men will say, as they look upon the labor and wrought substance of them, “See! This is what our father did for us.”

He himself confesses to initially having a poor opinion of his own hotels, but he believes now that he has something that he can be proud of. “Every time I go to Legazpi or Tacloban, I am overwhelmed with awe and pride. I want our people to feel that too,” he said.

Lee entered the hospitality industry at a time when tourist arrivals in the Philippines were expected to hit 10 million by 2016. He observed that although there are many hotels being built to meet the demand, almost as many are closing down because they are overestimated how much work and patience are needed to operate a successful hotel.

He thinks that this failure rate is because they built the hotel with only profit in mind. “In all businesses, you have to make money – but you also have to have the passion for the business,” he said.” Look at all the great companies – Microsoft, Google, etc. They started not because they wanted to make money, but because the love doing it. If I didn’t love the hotel, I would have closed it last year.”

Until last year, it was an uphill climb for Lee. Slowly, however, he is establishing the Oriental hotels, thanks to his insistence on first building a strong Oriental brand. Each Oriental hotel has its own identity and unique features; the group also has a hotel for all kinds of travelers. This year, Lee is launching the express hotel, for people on the go and who just need a place to sleep. The priorities in these hotels are comfortable beds, high water pressure, hot water, big work desks, and efficient Internet service. The initial locations are in Bacolod, Iloilo, and Balanga, Bataan, above the Grand Terminal and Mall.

Although he is the company’s president and CEO, he practices hands-on management in business development. “I love building something out of nothing,” he said. Whenever he visits a property, he said he has to feel something for the property, whether it’s excitement or euphoria or goose bumps, even if the number say otherwise.

“If I believed in numbers, I would not have built in Leyte; the numbers then were really bad,” he said. The Leyte property, had been an army barracks converted into a PTA-owned hotel. “It’s now the preferred location for conferences in the Visayas,” he said. The Pagsanjan property, which is planned as a resort, will capitalize on Pagsanjan falls. The falls had its ups and downs in terms of reputation, but Lee sees this as a challenge. Despite its problems, Lee thinks the basic attraction remains intact.

“I want to be known as somebody who was able to build a hotel,” he said, adding that it will be the business that he will retire in, and that he will probably leave one or two hotels where he will spend his retirement days.

The feeling of being at home away from home is at the very heart of Lee’s hotels. Although the name “Oriental” comes from his desire and fascination for faraway, mysterious places, he has chosen the sampaguita flower as the Oriental’s symbol, which holds for him a personal significance. His grandmother had several sampaguitas in her garden, whose scent would waft into the house when they bloomed in the afternoon. It brought feelings of comfort to Lee whenever he encountered the flower, bringing him back to his grandmother’s garden and memories of home. It is this same feeling that he wants his hotels to give to its guests: “Wherever you are, this is home.” AD